This collection is currently without a curator and access is therefore limited. For inquiries about loans and visits, please contact Head of Collections Nikolaj Scharff: nscharff@snm.ku.dk 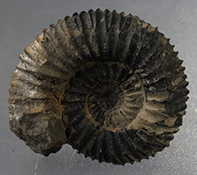 The fossil specimens in the Mesozoic and Cenozoic invertebrate collection mainly derive from Denmark and Greenland, with some materials from other parts of the globe, chiefly Europe.

Together with the Paleozoic Invertebrate collection it encompasses some 1 million specimens.

A number of specimens in the collection have played a central role in the history of palaeontology. Charles Darwin depicted Polliceps carinatus Phillippi from Messina in Italy in one of his monographies on barnacles and Charles Lyell figured the nautiloid Hercoglossa danica Schlotheim from the Paleocene of Faxe, Denmark in his work Principles of Geology. 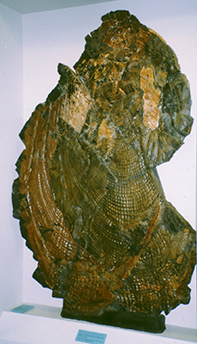 Inoceramus steenstrupi - the longest known bivalve shell in the world

Some specimens are spectacular in their own right, such as the 83 million years old Inoceramus (Sphenoceramus) steenstrupi-specimen from the Nuussuaq Peninsula of West Grenland. The specimen measures 178 cm and thus the world’s longest known bivalve shell. It was discovered 800 meters up in a cliff wall and excavated which some difficulty in 1952. It is now on display in the exhibition Precious Things at the Zoological Museum.

A substantial and important part of the collection derive from collected by the Geological Survey of Denmark and Greenland (GEUS) and its predecessors. This material is deposited at the Natural History Museum of Denmark in accordance with formal agreements between the two institutions.