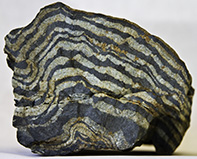 The Petrographic collection consists of magmatic and metamorphic rocks, chiefly from Europe and the North Atlantic region, especially Greenland, Iceland and the Faeroe Islands.

The materials within the Petrography and Dynamic Geology collections date back more than 200 years, with specimens from Denmark (especially the island of Bornholm), the Faeroe Islands, Iceland and Greenland. Some of these collections are also of significant importance to the scientific history of geology.

A substantial and important part of the collection derive from specimens described or referenced in scientific publications from the Geological Survey of Denmark and Greenland (GEUS) and its predecessors. This material is deposited at the Natural History Museum of Denmark in accordance with written agreements between the two institutions. 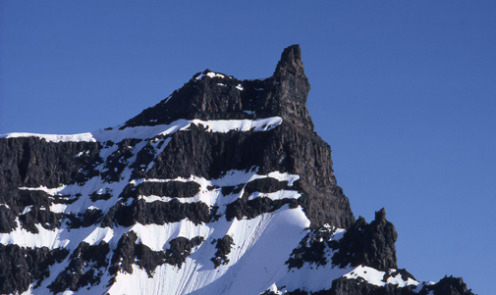 The mountain Giesecke’s Monument on the Nuussuaq Peninsula of West Greenland is made up of massive basaltic lava flows. Each lava bed was created during massive eruptions 60 million years ago. The remarkable profile of the mountain was created by erosion during the Quaternary.