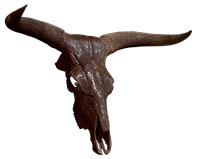 The Quaternary Zoology collection only comprises of faunal skeletal remains (archaeological and geological) from the Quaternary period (the last 2.6 million years). The main focuses are the Danish and Greenlandic faunal remains but due to a couple of historical collections it is also very strong in South American faunal remains (including, as the only exception, some human remains) and to some extent faunal remains from Western Asia and South East Asia.

The Quaternary collections are associated with the Centre of GeoGenetics.

Apart from a few scattered older remains, the Danish collection cover the Eemian interglacial (approx. 130.000-115.000 years ago) with a handful of primary deposits of herbivores and a few scattered secondary deposits, the Weichselian glaciation (approx. 115.000-11.700 years ago) with lots of re-deposited bones from herbivores, primarily woolly mammoth (Mammuthus primigenius) and, from the late glacial period, primary deposits of reindeer (Rangifer tarandus) – some of which represents butchery remains from the earliest signs of humans in Denmark: hunter gatherers from the Hamburgian culture. Primarily though the Danish collection comprises of faunal remains from archaeological and geological sites from the Holocene interglacial (11.700-present). It comprises millions of skeletal remains from fish, amphibians, reptiles, birds and mammals (not including humans which are stored at the Laboratory of Forensic Anthropology, Unit of Forensic Anthropology, University of Copenhagen. 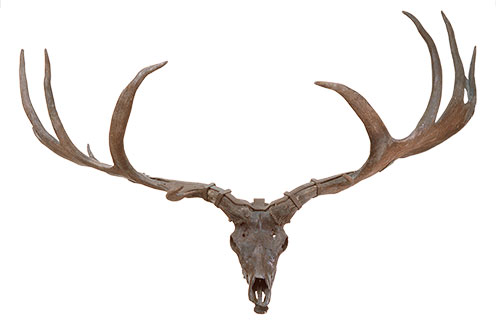 The Greenlandic collection consists almost solely of faunal remains from archaeological and geological sites from the Holocene interglacial. These again are primarily faunal remains from archaeological sites ranging from the earliest paleo-Eskimo Saqqaq culture (4500-2800 years ago), over the Norse settlements (10th-15th centuries), to the Thule culture (13th-19th centuries), and recent Inuit settlements (19th and 20th century). The collection is administered by the Natural History Museum of Denmark but all remains excavated since 1980, all paleo-Eskimo remains, and all Norse remains, belong to the Greenland National Museum and Archives. All work on these faunal remains will therefore require a written consent from the director or deputy. All human remains are stored at the Laboratory of Forensic Anthropology.

The South American collection consists of faunal, and some human, remains from primarily Argentina and Brazil collected in the 19th century. The Brazilian remains originate from cave deposits and are of Late Pleistocene to Holocene age. They comprise mainly of the remains of smaller vertebrates but also remains from mega fauna are represented. It contains several type specimens described by Peter Wilhelm Lund and Herluf Winge. The Argentinian remains are almost all from mega fauna and are of Mid Pleistocene to Late Pleistocene age. Major mammalian taxa represented in the South American collection are Rodentia, Xenartha and Carnivora. The collection contains approx. 100.000 bones (or fragments thereof) from larger vertebrates, 2½ million bones (or fragments thereof) from smaller vertebrates, and approx. 1300 matrix blocks (breccia) containing unprepared bones and fragments.

The rest of the collection is a mix of faunal remains from all over the world. Of some interest it is noteworthy to mention remains from various archaeological sites in Canada and Alaska (U.S.A.), and also from Sudan. 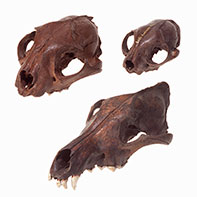 Danish faunal remains: We are the central depository for all Danish archaeological and geological faunal remains, and have extensive collections from predominantly the late Pleistocene and Holocene epochs.

Greenlandic faunal remains: We act as the depository for all Greenlandic archaeological and geological faunal remains. The special Arctic preservation conditions of Greenland with often deep stratified permanently frozen midden deposits provide unique archives for organic materials. Not only bone, antler and tooth but in many instances also baleen, fur and claws have been preserved.

Especially the faunal remains of the Saqqaq culture (4500-2800 years ago), dominated by the three large sites Qeqertasussuk and Qajaa in the Disko Bay and Nipisat near Sisimiut. These sites produce excellently preserved bones and contribute with more than 40 vertebrate species including a large proportion of birds, amongst which are the oldest and most northerly found great auk (Pinguinus impennis) bones from Greenland.

Asian faunal remains: We have a substantial collection of faunal remains from archaeological sites across Western Asia. Among others these include faunal remains from the Danish excavations at the island of Umm An-Naar, United Arab Emirates (1953-1978), in Luristan, Iran (1960’ies) and The Shkarat Msaied Neolithic Project, in Jordan (on-going). The collection represent all time periods from the Palaeolithic to the Islamic Period.

African faunal remains: The faunal remains from the Joint Scandinavian Expedition to Sudanese Nubia, representing mainly C-Group and Pan-grave cemeteries, are particularly important as this entire area in Northern Sudan is submerged under Lake Nasser today.

South American faunal remains: We have an extensive collection of faunal remains (including humans) from several caves near Lagoa Santa, Brazil, and from the Plata area in Argentina. The Lund collection is well known for its many type specimens and its human remains. It also comprises more than 2½ million bones, or fragments thereof, from micro faunal remains (fish, amphibians, reptiles, birds and mammals). The Lausen collection represents larger, more complete individuals. Both are well known for their mega faunal remains.

Comparative collection: We have an extensive and well curated comparative collection with specimens of all most all extant Danish and Greenlandic fish, amphibians, reptiles, birds, and mammals (with emphasis on domestic animals and their different breeds), a growing collection of Middle East fishes, and easy access to the recent mammal and bird collections.

Although the specimens in the Quaternary Zoology collections can be traced back as far as to the 17th century it is not until the beginning of the 19th century that we see the first inklings of Danish Quaternary Zoology in a more scientific approach. At first it is mainly a trickle of finds coming in and being described by professor of Zoology J.H. Reinhardt (1776-1845) but not of much scientific interest.

The job of making it a proper field of research and focus in Denmark would fall upon the shoulders of Japetus Steenstrup (1813-1897). In the 1830’s he began by meticulously describing the faunal and floral remains from two Zealandic bogs. Through these studies he could show that the climate, and thereby the surrounding natural habitat, had undergone radical changes and divided the Danish Holocene into four major periods based on the predominant type of tree of those periods: The Aspen Period, the Pine Period, the Oak Period and then finally the Alder Period. 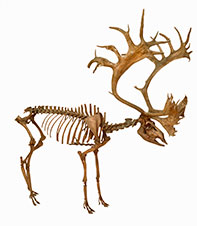 In 1845 he takes over from Reinhardt as professor of Zoology at Copenhagen University and is thereby responsible for the zoological collections. In 1848 he instigates the Lejre Committee, or more famously known as the Kitchen Midden Committee (the Danish word Køkkenmødding later coins the English translation kitchen midden which becomes the household term within archaeology to describe a heap of shells and bones created from the discarded scraps of domestic waste), together with the geologist J.G. Forchhammer and archaeologist J.J.A. Worsaae. Thereby began the strong bond between Archaeology and Natural Science and ever since then the bones from Danish archaeological sites have been pouring into the Zoological Museum, thus creating the foundation, and future, of the Quaternary Collections.

This foundation was further reinforced by his successor Herluf Winge (1857-1923). Winge meticulously described the phylogenetic relationship amongst mammals by studying the development of their teeth, and through his rigorous scientific approach he described, and determined, more than 20.000 bone fragments from 60 different vertebrate species, from the Ertebølle kitchen midden. His work helped to support the idea of a separation of the Stone Age into an older period of hunter gatherers accompanied by the domestic dog, and a younger period of farmers with their domesticated cattle, pigs, and sheep.

Magnus Degerbøl (1895-1977) took over from Winge in 1924, and was the instigator of an actual formalization of the Quaternary Zoology section. He introduced the method of morphometrics and studied the morphological differences between the remains of ancient and recent mammals. He studied the bones of numerous archaeological sites and kept the scientific focus and approach throughout all of his work. One of his most utilized publications is the work on The Urus and the Neolithic Domesticated Cattle in Denmark from 1970, which he wrote together with Bent Fredskild.

Degerbøl’s assistant and later successor, Ulrik Møhl (1908-1992), was something of an all-round zoologist and conservator. He began the formal registration of the vast amounts of archaeological and geological faunal remains that started to pour into the museum in the 1930’s and 1940’s, and it is almost impossible to come across any faunal remains from Denmark or Greenland since then that hasn’t been determined by Møhl. It was Møhl that discovered what was, for a long time, thought to be the earliest traces of humans in Denmark: the remains of a fallow deer (Dama dama) from the Eemian interglacial period. He believed that the bones bore evidence of having been split by humans in order to extract their marrow. Although this was later disproved, his methods and approach was new for his time and would help to cast new light on the field of zooarchaeology. 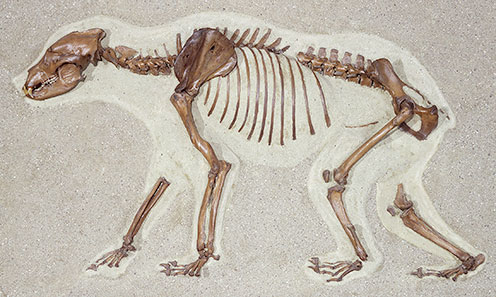 Considered the first Norse archaeologist by some Hans Egede (1686-1758), a Dano-Norwegian missionary, in 1723 conducted a small excavation in the church ruin of Hvalsey. Still, systematic archaeological research of Norse settlements only commenced in the late 19th century with Captain Daniel Bruun (1856-1931). Send out by ‘Commisionen for Ledelse af de geologiske og geografiske Undersøgelser i Grønland’ (Commission for the Management of Geological and Geographical Investigations in Greenland) established in 1878 Bruun in 1894 and 1903 was the first to conduct systematic excavations of Norse ruins in the Østerbygd (the Eastern Settlement). From 1921 the Danish National Museum took over the investigation of Østerbygden and Vesterbygden (the Western Settlement). Especially during the 1930s the archaeologists Poul Nørlund (1888-1951), Aage Roussell (1901-1972) and in the 1940s and 1950s C.L. Vebæk (1913-1994) contributed considerably to Norse archaeology.

Early archeology exploring of the palaeo-eskimo and Inuit cultures of Greenland began in the Disko Bay where deep stratified middens had been discovered. Carl Fleischer a resident of Qeqertaq in Disko Bay in 1870 and 1871 was the first to carry out a detailed stratigraphic description of the huge Qajaa midden. Therkel Mathiassen (1897-1961) who documented the Thule culture and its connection across Alaska and Greenland and Erik Holtved (1899-1981) further contributed with large scale excavations in most regions of Greenland.

Despite the meticulous descriptions provided by Carl Fleischer not until the 1950s the three main phases on the Greenlandic prehistory were recognized by Jørgen Meldgaard (1927-2007) together with P.V. Glob (1911-1981) and Helge Larsen (1905-1984) during excavations in 1953 and 1955 on the now famous Sermermiut site.

The archaeological expeditions, already from the early days frequently joined by zoologists as for instance Ulrik Møhl (1908-1992), provided large numbers of animal bones which were stored at the Natural History Museum of Denmark, the first being faunal remains excavated by Carl Fleischer upon request by Japetus Steenstrup. Numerous geological expeditions also contributed with surface collected specimens of vertebrate remains. 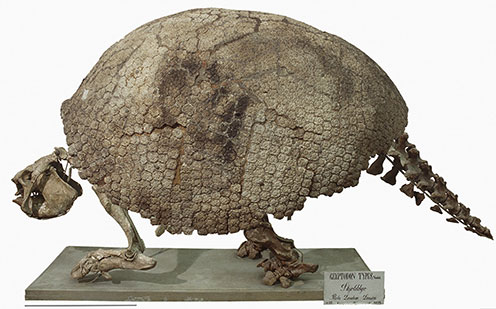 The Lund collection was collected by Peter Wilhelm Lund (1801-1880), a Danish naturalist famous for his explorations of more than 800 limestone caves during a 10 year period (1835-1845) in the state of Minas Gerais, Brazil. In these caves he collected a vast amount of fossils, which he subsequently donated to King Christian the 8th of Denmark in 1845. Lund also described a number of new mammal species and is by many considered to be the founder of Brazilian paleontology. His work was continued, and finalized, by Herluf Winge. This resulted in an astonishing work, E Museo Lundii, over the cause of 27 years.

The Lausen collection was amassed by Valdemar Lausen (1834-1889), a wealthy Danish medical doctor and philanthropist, who, while living in Buenos Aires, Argentina, acquired many fine fossils at auctions. Most of the specimens were excavated by Santiago Roth (1850-1924), a Swizz-Argentinian paleontologist. Beginning in 1877, Lausen sent large portions of his collection to the Zoological Museum, University of Copenhagen, and he eventually ended up donating his entire collection as a way of thanking the University for his Medical Degree.