The herpetological collection contains reptiles and amphibians, with all Danish species represented as well as good coverage of European species. Additionally, there are substantial collections from the former Danish West Indies colonies, Brazil, sub-Saharan Africa, the Philippines and the islands of Southeast Asia.

Approximately 2,700 species are represented. Most specimens are preserved in alcohol and for the last 10 years, DNA samples have been recovered from all collected specimens.

All species of Danish reptiles and amphibians are present in the collection, along with representative collections from the rest of Europe. The brothers’ share of these specimens was collected before 1950.

A small, very fine historical collection of snakes from the Coast of Guinea, including the spitting cobra, Naja nigricollis, described by Reinhardt (1843).

Terrestrial amphibians and reptiles from the Philippines and Melanesia, as well as marine sea snakes from the Pacific collected by the Noona Dan Expedition (1961-1962).

Snakes from East and Central Africa, especially Tanzania, collected since the 1970’es

An extremely comprehensive collections of tree frogs from sub-Saharan Africa; this section contains a substantial number of type specimens.

A rich collection of sea snakes from the Indo-Pacific region.

Johannes Th. Reinhardt increased the collections personally by undertaking three collecting trips to Brazil during the 1840’es and 1850’es. He described the collected material together with Christian F. Lütken in 1861.

Albert H. Riise was an apothecary in the Danish West Indies colonies from 1838 to 1868, and also an active amateur natural historian; he acquired and collected a number of reptile specimens from the Caribbean, including species now extinct.

The comprehensive subcollections of reptiles and amphibians from Denmark, as well as from the rest of Europe, are chiefly due to the efforts of a single collector, Mr. Roland Skovgaard, with only a little new material added after 1950.

The Noona Dan Expedition (1961-1962) brought home a fine collection of terrestrial amphibians and reptiles from the Philippines and Melanesia and marine sea snakes from the Pacific.

Arne Schiøtz’ studies on tree frogs from West and East Africa from the 1960’es to 1980’es resulted in fine collections from this area. Schiøtz re-described several taxa, as well as erecting new ones.

Since 1970, the Natural History Museum of Denmark has had extensive research efforts in East Africa, in particular Tanzania. As a consequence, the herpetological section has abundant collections (especially snakes) from this area.

Jens B. Rasmussen was curator of herpetology from 1977 until he passed away in 2005. His research area focused on phylogeny and biogeography of African snakes and worked with a comprehensive revision of the material kept in major collections, with the aim of producing a speciation atlas for African snakes.

Since 1985, the work of Dr. Arne R. Rasmussen has personally more than doubled the number of sea snake specimens, both through fieldwork collections and acquired through international connections. 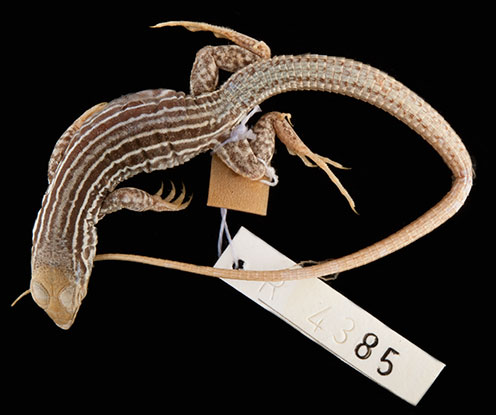