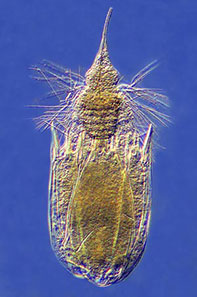 The Natural History Museum of Denmark has a long history in the study of "Lower Worms" (Platyhelminthes, Nemertea and Aschelminthes) and the so-called Proarthropods (Tardigrada, Onychophora and Pentastomida). Current research is focused on taxonomy and phylogeny of Aschelminthes, with particular emphasis on Kinorhyncha, Loricifera and Tardigrada.

Particularly significant are the type materials of former curators, including the large collections of Levinsen (Trematoda), Krabbe (Cestoda) and Ditlevsen (Nematoda). Especially the collection of Ditlevsen (about 7000 microslides) is one of the earliest collections of free- living nematodes in the world, and historically this microslide collection is very important, as it dates from the early 1900'es.

The collection of proarthropods also contains important material from several major expeditions in which the museum has been involved.

The tardigrade collections are perhaps the most important collections held anywhere in the world. This is partly because they include both the marine, limnic and terrestrial type materials of Thulin (1911, 1928) and Pedersen (1951), and partly because of the sheer size of this collection, with more than 20,000 microslides containing about half of all the 700 described species of the phylum.

The museum has the type material of the first described loriciferan, Nanaloricus mysticus, and types of another 18 species of this recently described phylum. Furthermore the loriciferan collection of the museum includes 73 undescribed species collected especially from the deep-sea and polar regions.

Also the collection of Kinorhyncha, is significant, being the second largest in the world, and the largest outside North America. The collection includes more than 1,000 microslides, and representis 95 of the 210 known kinorhynch species. 65 species are represented by types.

The type material of the two most recently described animal phyla, Cycliophora and Micrognathozoa, is also housed at the museum.