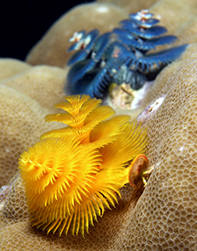 The Vermes section of the museum houses the collections of four phyla: Annelida (including Vestimentifera and other Pogonophora), Echiura, Sipuncula and Chaetognatha. Among them, emphasis in collection and research has historically been placed on the polychaetous annelids, although present holdings of some of the other groups are considerable in size and scope.

The Polychaeta collections are presently estimated to consist of about 85,000 lots, including the type specimens of about 400 species. The geographical areas in which the collection has particular strengths are Denmark, the North Atlantic, Greenland, the east coast of the United States, the Caribbean, West Africa, South Africa, the Persian Gulf, Thailand, Indonesia, Australia, New Zealand and the Pacific coast of Central America.

The collections are remarkable in containing a great deal of material from some of the deepest regions of the world's oceans. Systematic representation is broad for almost all known families of polychaetes, but particularly strong for Nereididae, Phyllodocidae, Cirratulidae, Chaetopteridae, Sabellariidae and Serpulidae, as well as in several holoplanktonic families. Of great potential value are the large numbers of as yet unidentified lots from the Indian and Pacific Oceans, primarily collected during the various expeditions led by Th. Mortensen.

Holdings of the small annelid group Pogonophora (including Vestimentifera) are also considerable, encompassing approximately 1,000 lots. The most notable components of this collection are extensive pogonophoran material from the Skagerrak (including the type material of several species described by Kirkegaard) and a few extremely well preserved vestimentiferans (Riftia) from hydrothermal vents of the West Pacific.

The holdings of the other main group of annelids, the Clitellata (oligochaetes and hirudineans), contain about 12,000 lots (approximately 50 types). Representation is particularly good for the fauna of Denmark and West Africa due to recent collection efforts (Clausen).

The Vermes section contains about 3,000 lots of Echiura and Sipuncula, most of which were collected during the 20th Century. The most significant part of these collections is the material (especially from the North Atlantic, the Mediterranean, West Africa and the Indian Ocean) that was published on by Wesenberg-Lund, including the type material of about 30 species.

Finally, the museum's collection of the primarily planktonic phylum Chaetognatha is considerable in size, containing about 4,000 lots. This collection is largely composed of unidentified material from the South Atlantic, in excellent condition and of great potential value to taxonomists. Much of the material was collected during the Dana, Godthaab and Thor expeditions.

The origins of the "worm" collection of the Zoological Museum, Copenhagen can be traced to the 17th Century, but the first truly large contributions derive from the sampling efforts of various workers in Greenland during the end of the 18th Century (published on primarily by Fabricius and O. F. Müller) and in the Danish West Indies during the first half of the 19th Century (published on by Krøyer, Mörch, Ørsted and Grube).

Since that time, the major source of material for the collections has been the participation of Danish zoologists in various expeditions. Several of these expeditions concentrated on Greenland or other areas of the North Atlantic (e.g., Dijmphna, Tjalfe and Ingolf), whereas others were more world-wide in scope (e.g., Dana, the various expeditions led by Th. Mortensen, Atlantide and Galathea).

Finally, previous curators (Levinsen, Ditlevsen, Wesenberg-Lund, Kirkegaard, Eibye-Jacobsen) have further assured the growth of the collections through the sampling efforts of specific individuals (in recent times most notably Rasmussen, Eibye-Jacobsen, Petersen and Clausen) and the exchange of material with other, similar institutions throughout the world.