Apart from the fishes and sharks mentioned above, the collection contains the very important early tetrapod fossils (early four-legged vertebrates) Ichthyostega and Acanthostega, from late Devonian deposits in East Greenland; late Triassic vertebrates from east Greenland (dinosaurs, phytosaurs, and mammals); a large collection of predominantly ray-finned fish with some birds and turtles, from the earliest Eocene marine diatomite deposits of the Limfjord area in Jutland, Denmark; and finally a representative collection of cetacean fossils from the Oligocene and Miocene deposits in the South-Western parts of Jutland, Denmark. 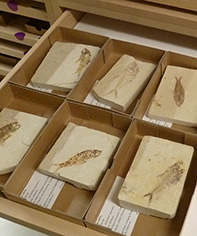 Denmark is not very rich in vertebrate fossils, but as the national museum within natural history, we do have a strong representation in our collection (mainly sharks, lobe- and ray-finned fish, a few birds, and some cetaceans).

Other museums worth noting in connection with collections of Danish vertebrate fossils are the Fossil- and Mo-clay Museum, and the Fur Fossiler Museum, both in Northern Jutland; and the Museum Sønderjylland Gram Claypit - Palæontology in South Jutland.

We act as the national depository for all Greenlandic fossils. This makes our Greenlandic collection the world’s finest. It is therefore worth noting that everything excavated from 1991 and onwards belongs to the Greenland National Museum and Archives. All work on these fossils will therefore require a written consent from the director or deputy. 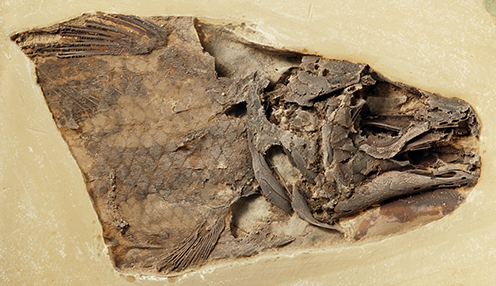 Diverse assemblages of Cretaceous and Tertiary shark teeth and microteeth assemblages documenting the Cretaceous-Paleogene transition from marine deposits in eastern and northern Denmark.

The oldest specimens in the collections go back to the 18th century. They were collected by the Dutch naturalist and pharmacist Albertus Seba (1665-1736) and bought by the Danish count Adam Gotlob Moltke (1710-1792) in 1762. They remained as part of the Moltke family’s private collection until 1810 when they were donated to the University of Copenhagen by count Joachim Godske Moltke (1746-1818), son of A.G. Moltke.

Throughout the 1800’es and first half of the 1900’es, there was no tenured lecturer of vertebrate palaeontology at the University of Copenhagen. Thus additions to the fossil vertebrate collection only happened intermittently, and most acquisitions were smaller collections of non-Danish exemplar specimens for teaching purposes. However, mention should be made of a number of Oligocene and Miocene cetacean fossil remains from southeast Denmark, which were studied, described and accessed into the collections in the early part of the 1900’es.

This state of the collections was to change from the early 1930’es and onwards, when the University of Copenhagen’s fossil vertebrate collections received a series of substantial and important collections.

During Lauge Koch’s Three Year Expedition to East Greenland in 1931-1934, and then again in 1936, a team led by Swedish paleontologist, Gunnar Säve-Söderberg (1910-1948), brought back some of the most important and revolutionizing fossils: the then earliest known tetrapods, Ichthyostega and Acanthostega. These fossils derived from the Upper Devonian deposits along with several other fossils, mainly armoured placoderms, lobefin and lungfishes. The expeditions to East Greenland also recovered several important fossil fish and elasmobranch assemblages from the Carboniferous, Permian and lowermost Triassic. 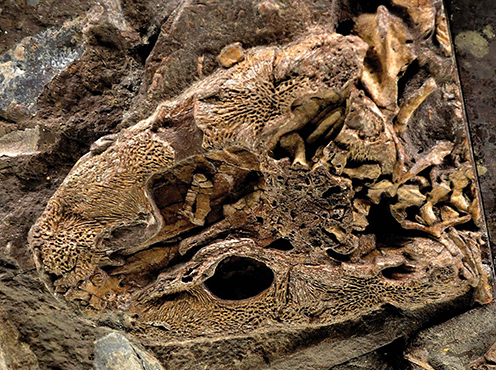 Skull of the early tetrapod Acanthostega

The Carboniferous and earliest Triassic fishes were described by Eigil Nielsen (1910-1968), who became the first formally trained and tenured Danish vertebrate palaeontologist at the museum. The earliest Triassic fishes in particular document the fauna during the important period immediately following the worst mass extinction event in Earth’s history, at the end of the Permian period 251 million years ago. Other elements described from the early Triassic includes temnospondyl amphibians, described by Säve-Söderbergh and Nielsen.

The fossil fishes from Greenland were supplemented by a significant collection of similar-aged earliest Triassic fossils from Madagascar, collected by Nielsen in 1953.

Further expeditions in cooperation with Swedish researchers to East Greenland in the 1950’es recovered more fossils from the Devonian and Permian, including more early tetrapods, as well as important shark and fish specimens. Studies of the Permian and Triassic elasmobranchs from Greenland had begun by Eigil Nielsen in the 1930’es to 1950’es, and was continued by his student and eventual successor Svend Erik Bendix-Almgreen (1932-2004) from the 1960’es and onwards.

Exquisite lowermost Eocene fossils of especially fishes had long been known from marine diatomite deposits in the Limfjord area of Northern Denmark. A local initiative established a small museum in 1953; today known as Fur Fossiler Museum. A good report was quickly established with the Eigil Nilsen and the Geological Museum in Copenhagen, and a formalized, ongoing cooperation was established from 1961 onwards. Throughout the years, more and more fossils have been recovered, documenting the marine fauna of the North Sea Basin during the Paleocene-Eocene greenhouse transition event. In addition to numerous fishes, exceptionally preserved birds and sea turtles contribute to the collections. Nowadays, fossils from the Paleocene-Eocene deposits make up the brother’s share of vertebrate fossils registered as Danekræ fossil trove. 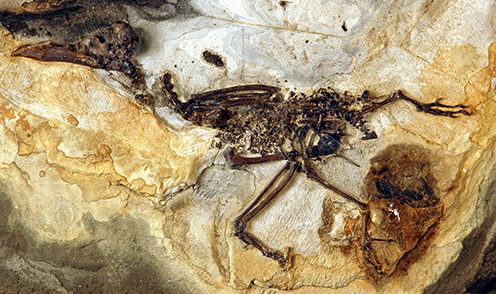 During the 1970’es a number of fossil whales were recovered and excavated from the late Miocene deposits in South Jutland under the supervision of Bendix-Almgreen. This fossil finds would lead to the establishment in 1978 of a local museum for natural history and palaeontology in the town of Gram; today known as the Museum Sønderjylland Gram Clay Pit - Palaeontology.

Expeditions in search of, and studies of the Devonian tetrapod material underwent a renaissance beginning in the late 1980’es, as material in the Copenhagen collections has been re-studied by Jennifer Clack (Cambridge University) and colleagues.

In the late 1980’es and early 1990’es a series of expeditions to Jameson Land in East Greenland in close collaboration with professor Farish Jenkins (1940-2012) of Harvard University led to the recovery of a diverse assemblage of vertebrate fossils, including dinosaurs, pterosaurs, turtles and early mammals. This effort was renewed in 2012 by an expedition led by Geocenter Møns Klint, which recovered additional, substantial fossil vertebrate material. These fossils are formally registered with the Greenland National Museum and Archives through the Natural History Museum of Denmark.

Since 2000, some recent research involving specimens from the fossil vertebrate collection include taxonomic studies of lowermost Eocene birds; the discovery and description of fossil melanosomes in fossil bird feathers; and latest Cretaceous and earliest Tertiary shark macro- and microteeth assemblages, documenting extinction and recovery patterns during the Cretaceous-Paleogene mass extinction event.