I. C. Fabricius (1745-1808) was one of the founders of systematic entomology and described about 10,000 species of insects as well as a smaller number of other arthropods. As a legacy of Fabricius’ dual employment at Copenhagen and in Kiel (then a Danish city, now in Germany), this globally important collection consisted of two parts deposited in Copenhagen and in Kiel, respectively. Many Fabrician type specimens are therefore housed at the Natural History Museum of Denmark (NHMD), including ones deriving from Fabricius' personal collection. This formally belongs to the Zoological Museum of the University of Kiel (Germany), but is on permanent loan to the NHMD. 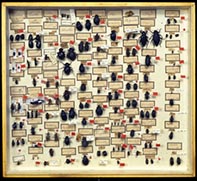 The Fabrician collection, in addition to the type specimens, also includes many other specimens of historical interest. Many of the Fabrician insect specimens are in an excellent state of preservation despite their great age, but very few Fabrician arachnid specimens, and no myriapods, have survived.

After World War II, the Kiel part of the collection was moved to Copenhagen as a long-term loan to be curated by the NHMD (then Zoological Museum, University of Copenhagen) staff.

In 2015 the Kiel Museum requested their part of the Fabricius to be returned. Since the majority of Fabrician species has their type series split between the Copenhagen and Kiel parts of the collection, and the latter part is significantly bigger than the former, a decision was made to relocate the entire Fabricius beetle collection to the Zoological Museum in Kiel in 2017.