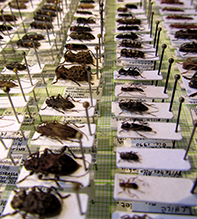 The entomological collections contain insects and other land-dwelling arthropods, such as arachnids (spiders, mites, scorpions and harvestmen) and myriapods (millipedes and centipedes).

The Natural History Museum of Denmark has more than 3.5 million insects mounted on needles in the dry collection and at least a similar number of insects and land-dwelling arthropods preserved in alcohol.

Around 100,000 described species are represented (of a total number of more than one million species). There are probably hundreds of as yet undescribed species in the unsorted subcollections.

Animals from all over the world are contained in the entomological collections, but some geographical areas are better represented than others. Denmark is of course well-represented, as well as the current and former members of the Danish Commonwealth (Faeroe Islands, Greenland and Iceland), for which we house the most exhaustive reference collection anywhere in the world. Especially the Danish collections contain substantial contributions from amateur collectors, who have donated their private collections.

Furthermore, many sections of the collections are developed an expanded through collection trips at home and abroad. These expeditions are made regularly by the section employees, often in cooperation with international researchers. The later years have seen large collections in Denmark, Greenland, Greece, Spain, Morocco, Tunesia, Tanzania, South Africa, Thailand, India, Australia, French Guyana and southernmost South America (Argentina/Chile).