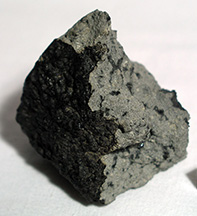 With about 900 specimens the Danish meteorite collection is a medium sized, historically important collection. It contains samples from all recognized types of meteorites. Two Apollo samples and several terrestrial impact crater samples are also included.

The meteorite collection is closely associated with the Centre for Star and Planet Formation.

The Danish Meteorite collection in numbers 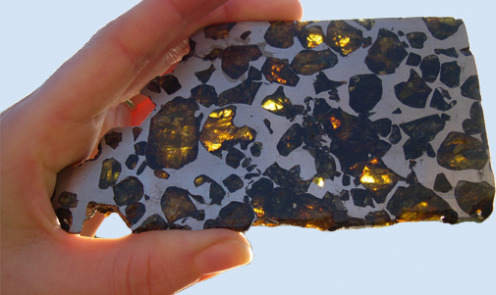 A piece of the pallasite Esquel, discovered 1951 in Argentina

The oldest specimens in the Danish meteorite collection originate from the collections of then Crown Prince, the later King Christian VIII of Denmark, who acquired them during the first half of the 1800's.

The first meteorite in the collection is Krasnojarsk, which was signed in around 1800. The Danish Krasnojarsk samples were likely studied by Chladni in preparation for his 1794 book which, for the first time, proved that meteorites came from space. The collection contains several historically important falls such as Ensisheim (1492), L’Aigle (1790), and Barbotan (1803). 165 meteorites were acquired between 1800 and 1900.

Since 1989, all meteorite falls and finds from Denmark are legally declared Danekræ fossil trove and any person who finds or gains possession of meteorite trove, shall immediately deliver it to the Natural History Museum of Denmark.

Centre for Star and Planet Formation